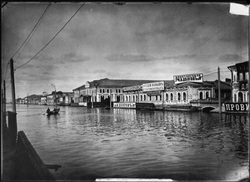 In 1909, just a few weeks after marrying Rosa Savory, Stephen Graham travelled to the Caucausus for a year planning to hike through the whole region.  He planned to write a book about his experiences.  The region was still very remote and dangerous, and Stephen was careful at night to sleep in places where no robbers could find him.  He was entranced by the whole area - even though many of the local population were not ethnic Russians - and in his first book A Vagabond in the Caucasus he described at length the places he saw and the people he met.  Graham based himself for much of the time in a mill near the town of Vladikavkaz where his neighbour was one Ali Pasha, a Moslem, who wore a ‘slate-blue cloak, golden stockings and loose slippers’.  Stephen later described him as ‘a noble man, by far the most refined and courteous of the dwellers at the mill’.  Once again Stephen refused to accept that Christianity had a monopoly on wisdom or truth. 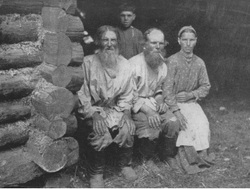 Stephen's next great adventure was his hike from Archangel in the north of Russia to Moscow (which he described in his book Undiscovered Russia).  The weather was terrible.  Stephen was by now convinced that the true spirit of Russian spirituality was to be found in the Russian peasantry.  In his book he described how their natural spirituality was expressed through their simple piety and sense of the nearness of God.  Stephen acknowledged that many Russian peasants were no saints!  But he did believe they had a sense of the importance of tradition and an intuitive faith that meant they led far richer lives than the workers in western countries like Britain.