Shore of the Black Sea 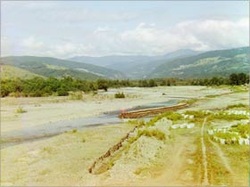 In 1911 Stephen Graham hiked along the north shore of the Black Sea.  In Changing Russia he lamented how the growth of industry in some of the main towns was changing the character of the old Russia he had come to love.  In A Tramp's Sketches he wrote very differently, describing how as he walked through the remote landscape, he found in Nature  intimations of ideals and truths that escaped those condemned to spend their lives in the towns.  'Tramping' had by now become for Stephen something akin to pilgrimage: a search for truths and insights that could reshape his life and his view of the world.  The world was a mysterious place that could only be understood through art and poetry and an openness to 'God':

"But beyond the universe, no scientist, not any of us, knows anything.  On all shores of the universe washes the ocean of ignorance, the ocean of the inexplicable. We stand upon the confines of an explored world and gaze at many blank horizons.  We yearn towards our natural home, the kingdom in which our spirits were begotten. We have rifled the world, and tumbled it upside down, and run our fingers through all its treasures, yet have not come upon the charter of our birth. We explored Beauty till we came to the shore of a great sea; we explored music, and came upon the outward shore of harmony and earthly truth, and found its limits".
.

Russian Pilgrims on the way to Jerusalem 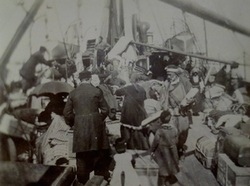 After reaching Constantinople, at the west end of the Black Sea, Stephen joined a boat laden with Russian peasant-pilgrims bound for Jerusalem.  When they reached the Holy Land, Stephen joined his fellow-pilgrims as they visited Jerusalem and other important biblical sites.  In his book With the Russian Pilgrims to Jerusalem he described a ritual of mass rebaptism on the banks of the Jordan, when hundreds of pilgrims undressed and plunged themselves into the water.  He also described the celebrations that took place in Holy Week culminating in Easter Day when:

"we passed … into the Russian cathedral, now joyously illuminated with coloured lights, and we heard the service in familiar church Slavonic. And we all kissed one another again.  What embracing and kissing there were this night; smacking of hearty lips and tangling of beards and whiskers! The Russian men kiss one another with far more heartiness than they kiss their women.  In the hostelry I watched a couple of ecstatical old greybeards who grasped one another tightly by the shoulders, and kissed at least a score of times, and wouldn’t leave off".

With the Russian Pilgrims was like Stephen's other travel books full of photos he took himself.  Stephen was a keen photographer and his best photos have an immediacy that words alone can never have.  It won him a much greater audience on both sides of the Atlantic than any of his earlier books.
.