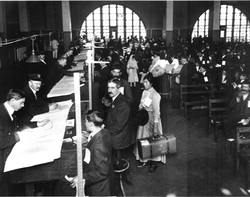 With the Russian Pilgrims had sold well in America which perhaps explains why Stephen Graham's next major trip took him, in the company of thousands of Russian emigrants, by ship from Liverpool to New York.  Stephen had loved Russia for its traditional life-style and he took an instant dislike to New York which seemed by contrast the epitome of modernity.  Graham nevertheless always had a surprising liking for city life (he lived for more than sixty years in the same house in London's Soho).  He was also flattered by the attention he received from the press in New York.

After leaving New York Stephen tramped a thousand miles to Chicago - a city he found soulless and polluted.  By the time he left the country, Graham had developed a love-hate relationship with the USA.   For all his dislike of its industry and commerce, it was here he returned on many occasions in the 1920s, when the Revolution had closed Russia to him for ever.